A woman has been awarded an £85k lump sum in a drawn-out inheritance battle, highlighting potential issues around cladding and court delays in future will disputes.

In Rochford v Rochford, the adult child was awarded a further £85k on top of the £25k she originally received from her deceased father’s will. The judge reasoned the claim was fair given the issues the claimant had selling her freehold property and her disability affecting her income.

The case is a reminder that while adult children making Inheritance Act claims is still quite rare, big awards can be made if there’s a compelling argument – making the outcome of these cases unpredictable.

Will dispute experts at leading national law firm Irwin Mitchell also point out the effect of two growing issues that could have a big impact on disputes later down the line: cladding and alternative dispute resolution (ADR).

Samantha Lauriston, Will, Trust and Estate Disputes solicitor at Irwin Mitchell said: “This case could be an early indication of issues that we may see more of in light of the pandemic’s effects on the court backlog, as well as the cladding crisis.

“In this case the claimant’s property, despite being freehold and in her name, was affected by cladding issues and so rendered the property unsaleable. Paired with her disability causing an income shortfall, the judge decided a lump sum was suitable.

“We could well see more claims like this being made if the Government’s cladding crisis plan leaves any gaps where property valuations could be affected.”

The defendant in the case refused to mediate for over a year, alleging the claimant’s argument was weak and that more disclosure was needed. As a result, the judge hit the defendant with additional costs to be paid for delaying the case’s conclusion.

Samantha continued: “There was also the interesting issue where the defendant refused to mediate, causing legal costs to spiral and the judge coming down harshly on his behaviour in the judgment.

“Mediation is becoming increasingly popular due to lockdown – as a team we’ve done dozens of them in the last year – and with the massive court backlog, may well become the legal route of choice in the coming years.

“In cases like this, it’s definitely in everyone’s best interests if ADR, like mediation or arbitration, can happen before needing to go to court – it can often be less stressful and also bring down legal fees. The judge was clearly unimpressed with the defendant’s actions on delaying the mediation, so the lesson here is not to drag out proceedings when they can be solved more quickly – or face the costly consequences.”

Originally the claimant had received £25,000 under her deceased father’s will. Unfortunately the defendant refused to mediate the case for over a year, citing the claim being weak and more disclosure from the claimant being needed.

The judge awarded the claimant an additional lump sum of £85,000 from the remainder of the estate, which was estimated at £193,000. Even though the claimant had a freehold property in her name and a difficult relationship with her father, the judge found her disability and income shortfall justified an award.

The defendant's refusal, and failure to beat the claimant's Part 36 offer, came at a high price: and costs payable on the indemnity basis, interest payable on costs and judgment sum at 5%, and an additional penalty of 10% of the judgment sum were all ordered against the defendant. 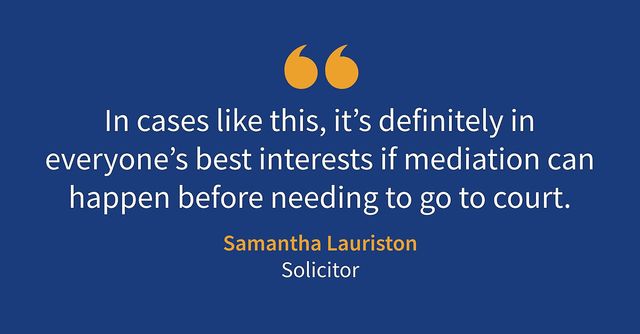