By Richard Smaller, a solicitor in the Leeds Will, Trust and Estate Disputes team

Probate claims rarely go to trial, and even then so often go unreported. I think this is a shame – every case turns on its own facts, and a recent case of mine had some very interesting ones, in particular concerning due execution and so-called “no-challenge clauses” in wills.

The case of Dawson v Dawson was heard in Leeds in November 2019. In it, the claimant (my client) brought proceedings to revoke a Grant of Letters of Administration on the basis of intestacy, granted to her three estranged siblings, in the estate of her late father. The claimant asked for this to be revoked because she’d found three valid wills.

The defendants, initially at least, maintained that all three wills were invalid on the grounds of forgery, lack of due execution, or lack of testamentary capacity, and as such proceeded on the basis that they were equal intestacy beneficiaries of the estate.

The defendants later changed their position to accept that the earliest of the three wills was actually valid, but proceeded with the litigation regardless. Despite having been legally represented for the majority of the litigation, unfortunately the defendants became litigants-in-person before the trial..

The deceased died in 2015 leaving wills from 2013, 2004 and 2003. He had not seen the defendants since 2000, but maintained a close relationship with the claimant and her family. The 2013 and 2004 wills left the estate to the Claimant. The 2003 will had left the claimant a significant lump sum and the residuary estate to third parties.

All three wills were professionally drafted, though contained errors, and were held by the solicitors who drafted them.

The 2013 Will was witnessed by the solicitor who drafted it and a distant family member (who was not a beneficiary). That other witness told us, as the claimant’s solicitors, that he did not witness the 2013 Will in the presence of the solicitor-witness. If the court was minded to find this, then the 2013 Will would have been invalid. It also contained several typos in the text and inaccurate addresses for beneficiaries. The 2013 will also included a provision that, if any of his children should challenge the validity of the will, then they would forfeit their inheritance – a so-called ‘no-challenge clause’.

The 2004 Will was witnessed by the solicitor who drafted it, and a former paralegal at the same firm. It also contained the “no-challenge clause” referred to above. The 2003 Will was again witnessed by two professionals, but was incorrectly dated as the year 3003.

After hearing evidence from a number of witnesses, including all of the attesting witnesses apart from the witness to the 2013 will who had told us that he was not present when the will was signed (which stood in contrast to the evidence of the solicitor-witness), HHJ Saffman found that the claimant was successful on all counts – both the 2013 and 2004 Wills bore the signature of the testator, they were both validly executed, and the deceased had testamentary capacity when  the wills were drawn up. The Grant of Letters of Administration was revoked and the ‘no-challenge’ clause was deemed activated – so the defendants lost the small inheritance left to them in the 2013 Will.

As dispute lawyers, we often seize upon mistakes in wills as evidence that the testator must not have either known or approved its contents (or else they would have picked up on the mistakes) or as evidence that the testator must have lacked testamentary capacity. In this case, HHJ Saffman found the numerous and quite obvious mistakes in the wills to be of very little weight concerning the allegation of a lack of capacity – even where the date of the 2003 will was a thousand years off!

Dispute lawyers and private client practitioners can take this case as further authority that ‘no-challenge’ clauses can be enforced. The legal authority cited in this case was Theobald on Wills. Testators may choose to take advantage of these clauses if they want to discourage their children from engaging in a dispute after their death.

Where one of the attesting witnesses to the will is hostile, and claims not to have actually witnessed the will, in contrast to the other attesting witness, this doesn’t necessarily mean that a court will make a declaration that the will is invalid. The court has absolute discretion as to how much weight, if any, to give to the evidence of the hostile attesting witness, and, in line with guidance in Williams, Mortimer & Sunnocks, must treat "even an apparently positive recollection of contradicting the attestation clause… with caution”.

Finally, this case is a reminder that some claims have to be run to trial to get anything for your client. The defendants in this case continued with a position which did not benefit them at all (as their admission that the 2003 will was valid led to their case being that they should only receive £100 each). The litigation was pursued by them as a means of depriving the claimant from an inheritance, rather than to increase their own. Sometimes, litigation is the last resort when faced with such a position and, I am pleased to say, one which was reflected in the substantial costs order made in favour of my client.

This was a great example of the expertise we have an Irwin Mitchell in this specialist area and is one of many such cases that we experience every day across our national team. 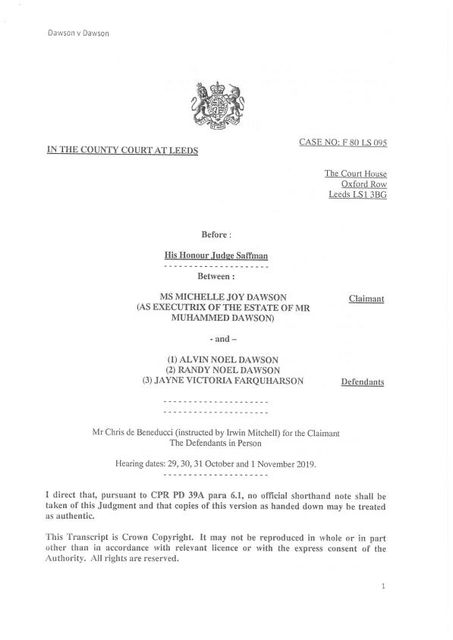 How can we avoid selling the family home? Care fees and the pitfalls of not planning for property
Jenny Batchelor

Administering an estate: Where do I start?
Nicola Hawkins

Do I own my front door? Landlord's fixtures explained
Katherine Thorpe
repost  cancel