Older generations are continuing to get married and defy a decline in marriage rates, according to new statistics.

The research, published today (12 September) by the Office of National Statistics (ONS), show a continued decline in marriages and rising divorce rates bar one age group: the over-70s.

Later life experts at leading national law firm Irwin Mitchell point out the over 70s age group are part of a generation that has benefited from a generous financial landscape throughout their lives, and may have accumulated wealth during their lifetime through increased property values and other assets.

They are also more likely to have taken financial advice relating to these assets and so better understand the tax planning advantages of marrying rather than cohabiting – but there are still risks involved.

Sarah Balfour, Family Law partner at Irwin Mitchell said: “Those aged 70 plus are bucking the marriage decline trend with a steady increase in later life marriages. This may be because for that generation, marriage has a symbolic value and deeper meaning than living with a partner.

“However, marrying in later life can bring risks if the parties are to later divorce. While marriage gives the weaker financial party rights and more of a safety net, it leaves the stronger financial party at risk in the event of divorce. A marriage in later life is likely to be a second or third relationship, so parties should be aware that getting married may invalidate any previously existing will, and take advice accordingly.”

The statistics also revealed a rise in the number of single people who have never married, with the number rising by 369,000 from 2017 to a total of 16.7m in 2018. This is in line with cohabiting households being the fastest-growing household type in the UK in recent years.

The household type grew faster than married couple and lone parent families, increasing by almost 26% between 2008 and 2018.

Sarah continued: “In the UK, we are still a long way from giving cohabiting couples the same rights and responsibilities as those who are married – despite the cohabiting couple household being the fastest-growing household type in recent years.

“Until this is addressed, we will continue to have a two-tier system where those who marry are treated very differently from those who do not.” 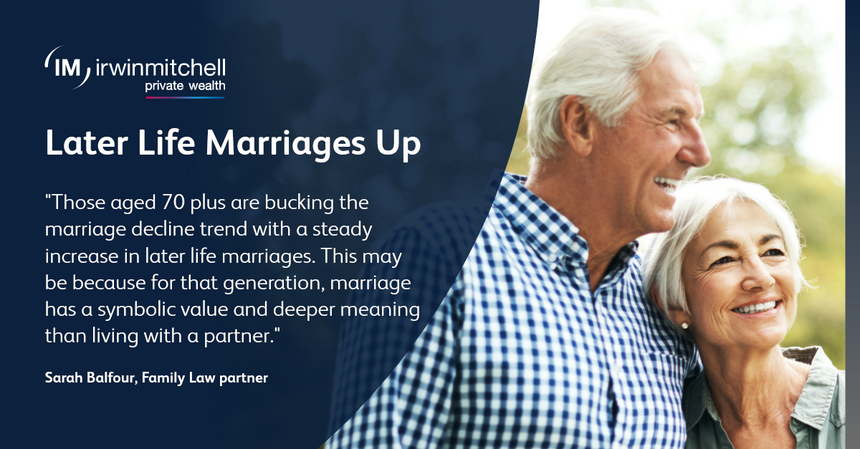 The proportion of people who are married in England and Wales has been declining over the last decade, while the proportion of single people has been increasing https://t.co/ZY5iUIV3tD pic.twitter.com/iCxlAgZFNF

The number of people who live with a partner and have never married has continued to increase, rising by 1.3 million people since 2008, to a total of 5.0 million (10.4%) in 2018. https://t.co/POR4TQdMM0 pic.twitter.com/atbDnBfOcu