The son of a former nurse lost a three-year battle with his siblings this week over his mother’s will after trying to secure the biggest share of her estate.

Beryl Parsonage, who died in 2015 aged 86, wrote a will before her death dividing her estate equally amongst her children and invalidating a previous will written in 2010 that left her son Duncan Parsonage more than his siblings based on monetary gifts given during her lifetime.

When Mrs Parsonage found out the property’s land was far more valuable than previously thought and left her son with significantly more than his siblings, she updated her will to reflect a fairer share of assets for her children.

One of the defendants and Mrs Parsonage’s son, Ian Parsonage, said the High Court’s decision was "what our mother would have wanted”.

Paula Myers, national head of Will, Trust and Estate Disputes at Irwin Mitchell said: “It is very sad that family relations can break down to the point where only years of litigation can decide how to move forward.

“In this case, Mrs Parsonage’s mental capacity was her son’s main argument for inheriting the lion’s share of the estate. We may well see more will disputes using this argument as we face an ageing population crisis and more inheritance disputes going through the courts.”

The lawyer representing the siblings said Duncan had “more or less wiped out his entire inheritance in legal fees in trying to invalidate his mother's will”, prompting comments from will dispute experts at Irwin Mitchell that a greater focus on mediation is needed.

According to research conducted by Direct Line Life Insurance, the number of disputes regarding applications for probate increased by an estimated 6% in 2018.

Paula continued: “Will disputes that end up in litigation are extremely costly, take months or years to decide, and put pressure on an already stretched court system. This is without mentioning the huge emotional strain that comes from being involved in a family dispute.

“We urge our clients to pursue all means outside of court first, such as mediation or arbitration, before considering the courts. Settling is usually better for all involved and can be a far more cost-effective way of handling an inheritance dispute. It is only when an agreement truly cannot be reached that litigation should be considered.

“Will disputes should not be taken lightly by families and this case goes to show the massive financial and emotional cost that can result.” 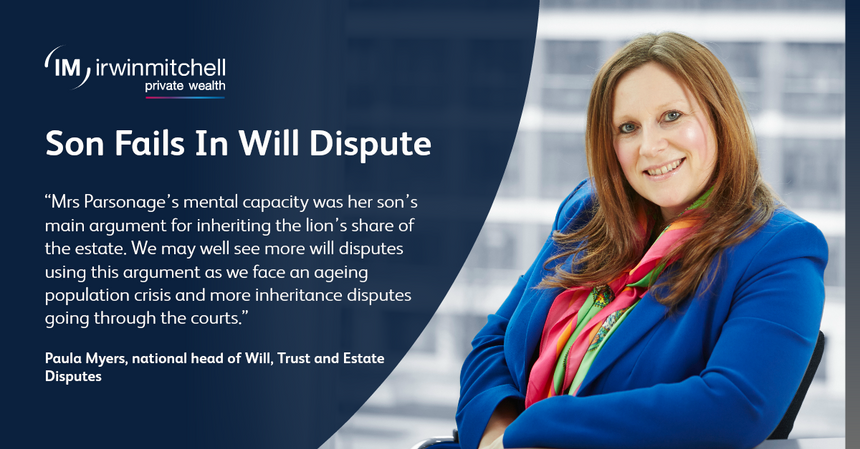 In the latest family squabble over inheritances, a "manipulative" son has eroded his to almost nothing in a failed three-year legal battle with his siblings to secure a larger cut of his mother's £1m estate https://t.co/glp0Gks5S4