As we wave goodbye to 2018, the year that marked the 100th anniversary of some women given the vote, we enter another special centenary year for women.

Women and the vote

To mark the centenary year, key women in the suffrage movement became permanent memorials across the country.

On 14 December 2018, colleagues in our Manchester office attended the unveiling of the statue of Moss-side-born Emmeline Pankhurst. The Our Emmeline statue now stands proudly outside of our Manchester offices in St Peter’s Square. However, it is only the second statue of a woman in the city centre and the first for over a century.

I cannot help but wonder why this took another 100 years.

Women and the law

In 1919, one year after some women were given the vote, they were also allowed to enter certain professions including the law. 2019 marks the 100th anniversary of the enactment of the Sex Disqualification (Removal) Act 1919. Three years later Carrie Morrison, Maud Crofts, Mary Pickup and Mary Sykes were the first women in England to be admitted as solicitors.

The First 100 Years project was established in 2014 by Dana Denis-Smith to mark this landmark anniversary for women in the legal profession; several Irwin Mitchell solicitors are involved with the project. The electronic archive charts the history and includes a timeline of landmark years for women in law from Eliza Orme, the first woman to earn a law degree in 1888 to Dame Elizabeth Butler-Sloss, the first woman appointed as a Lord Justice of Appeal in 1988. In conjunction with the First 100 Years project, the Supreme Court is hosting a free pop-up exhibition until the end of January to mark the start of the centenary year.

100 years after Morrison, Crofts, Pickup and Sykes were admitted to the roll of solicitors, we have made huge progress. The Law Society reports that as at 31 July 2017, 61.6% of newly qualified solicitors admitted to the roll were female and 50.1% of the 139,624 practising solicitors in England and Wales are female. Qualifying into a firm listed in the top 5 UK firms with the highest percentage of female partners, with 8 of our 13 offices managed by women and surrounded by fantastic female lawyers on a daily basis, I cannot envisage the profession without women in it.

Happy New Year! Here is to a year of celebrating women in the law, both those who have paved the way before us and those who continue to strive for true parity in the profession. 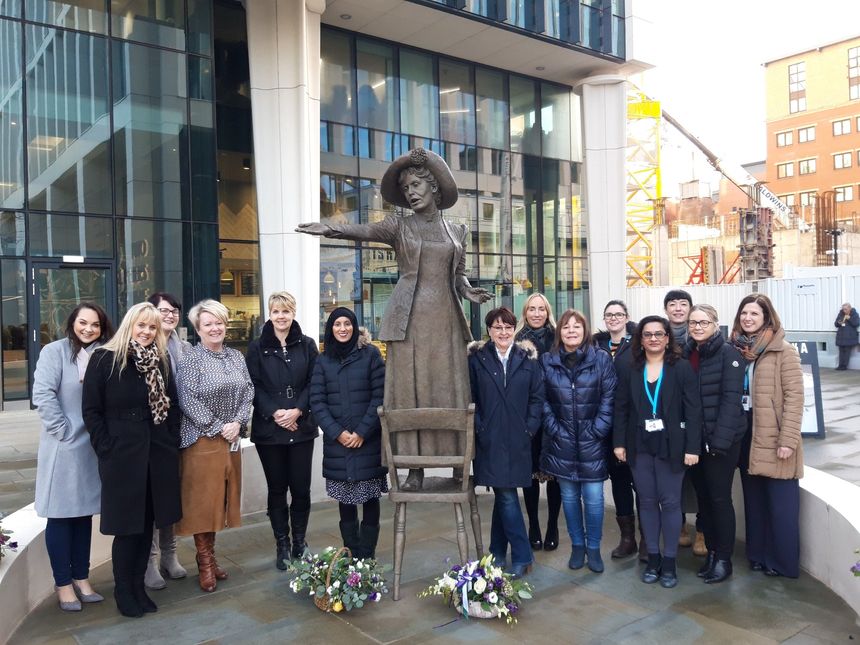 This morning will be the first of many where we give a nod to @OurEmmeline on the way into our #Manchester offices. Some of our female Partners, Senior Associates & Associates gathered to pay tribute and gain some #MondayMotivation after Emmeline’s statue was unveiled on Friday. pic.twitter.com/s5F8gGXUhU

A statute of suffragette Millicent Fawcett has become the first of a woman to take its place in London's Parliament Square. The bronze, designed by prize winning artist Gillian Wearing, was approved following an open letter in The Telegraph
Read more: https://t.co/70XtyCjEdW pic.twitter.com/DtsGQz5wo9

What better way to start the year than with a trip to the Supreme Court to celebrate 100 years of women in law? Don't miss our current exhibition on loan from @First100years which celebrates the centenary of the
Sex Disqualification (removal) Act 1919: https://t.co/rUTaDoB59J pic.twitter.com/shsvVFQBNq

From 0 women lawyers in 4 jan 1919 to a legal profession dominated by women-<50% of practicing solicitors are women-its time to celebrate progress,for women to behave like the majority, own their achievements & no longer fight battles won. Equal pay & leadership shd be focus now https://t.co/I6pSRJoH0R

This year marks one hundred years since women were allowed to train as solicitors and barristers. But have women got as far as we hoped? @Blacklawslaw and Amanda Pinto QC join @whjm 👉 https://t.co/f6wTO7iE1q pic.twitter.com/OaS6ddraA7

It's still hard to believe that we've only been allowed to practise law for such a short time! So grateful to the pioneering women without them who knows what I would be doing?! #100years #Womeninlaw #thankyou #grateful #ilovemyjob #lawgeek #ilovemyfirm #iwantobeajudge https://t.co/9lyHVA3ze2